Sneaky Five in a class of her own (Racing Photos)

“And he said ‘yeah, go on, let’s be brave’ so we put in a little $5000 bid…we broke our rule and went $5k over and the auctioneer [Chris Russell] bought the gavel down and said ‘well done Mitho, the sneaky five wins’.

“We had a laugh after and said, ‘well we’ve got her name anyway’.’’

Sneaky Five led in a quinella for trainers Ciaron Maher and David Eustace in today’s 2YO feature at The Valley on Cox Plate Day, as Sneaky Five defeated The Art of Flying.

The most expensive horse in the race, Sneaky Five produced a stunning turn of foot to leave her rivals in her wake to secure a valuable black-type win on debut.

Sneaky Five was offered at the Premier Sale by her breeder Mr Pan Sutong’s Goldin Farms.

She will now likely head to Sydney for the $1m Golden Gift at Rosehill in a fortnight.

Winning co-trainer Maher, who saddled up four runners in the race, described Sneaky Five as the least mature of his quartet in the race. 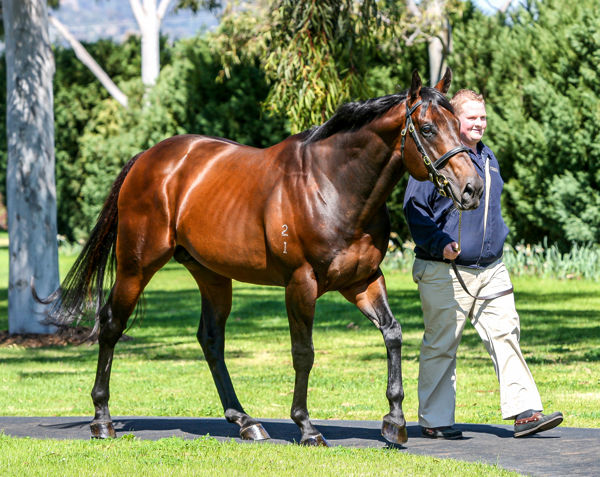 “The team have done a great job and the system is working well. I’m very proud,’’ Maher said.

“It’s great to win for Anthony Mithen and Nigel Austin and the whole Rosemont team.

“She gets most of her purse back today and she’s going to be lovely broodmare for them moving forward.’’